Pop culture, music, movies, books and art, not only saved my life as a shy awkward teenager, it was the driving force in making me into the creative 80s crazed animal I am today!

WHAT YOU LISTENING TOO!

BEST MOVIES and STREAMING of 22!

best music that was released, discovered, or re-discovered in 2022…

my FAV song never got a video but it was…

my FAV artist wouldá been Charli…

best songs from films or an event… 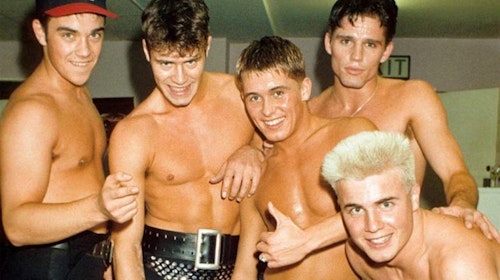 I discovered Take That through my first and very best “gay” friend growing up, as he put on a VHS tape that he had dubbed Could It Be Magic on. Cut to the Nobody Else album and I had every “official” single they had ever released and my fair share of merchandise and brain-washed my mum into a massive fan. She loved Gary and I made her picture frames of Gary throughout the house that annoyed the shit outta my old man. they weren’t the first boy band I loved as I was a big NKOTB fan and even saw them live when they toured Aust and apparently, according to my mum, was mistaken at the concert for Jordan Knight as I had the same bouffant hairstyle! But Take That was my one and only boy band obsession and came at the same time as I was going through Gayberty;

the period during which a confused and closeted individual reaches homosexual discovery and becomes capable of buggery.
“the onset of jacking of to Rogan Richards “
I have since given my collection of TT wonders to a Op Shop in Australia for a hard core TT fan to discover in jubilation! Ironically I discovered a TT book in an Op Shop here in Walthamstow which relighted my fire about the band and made me go back and rediscover their old songs and 1st TV appearances. I had also not followed their career after reuniting and it was fun watching their music videos for the first time. They will always take me back to a time of self discovery and confusion and a mixture of fear and self doubt with excitement and horny empowerment. If I had a soundtrack to my “coming out” Take That would definitely be on it…
Love0