By Rogan RichardsMarch 29, 2016No Comments 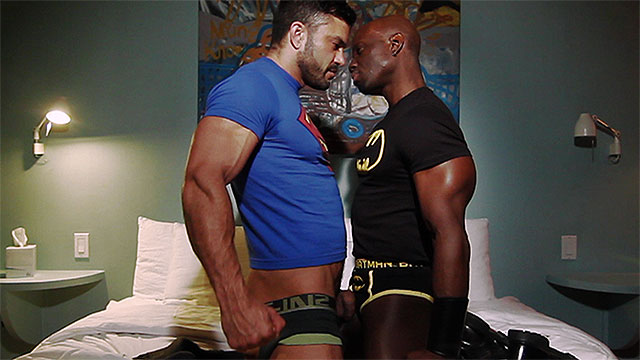 In 2012 a trailer and promo shots were released to a ROGAN RICHARDS’ film titled “SUPERHEROS” but a few major set backs happened that prevented the film from being posted. First ROGAN’S computer crashed and he thought he had lost the files. Then he recovered the files but lost his edit. Then he re-edited the film but that’s when his old web site was taken down and well, we ALL know the (horror!) story from that point on.

BUT here for the first time and renamed BATMAN DOES SUPERMAN (for obvious currant trending reasons!) is the film where you see JAY BLACK eat ROGAN’S super large ass out with more passion and hunger than has ever been captured on screen before. AND if that isn’t enough for you to check this film out then maybe watching him pin ROGAN down and force feed him his massive black cock will be!

Clarke Kent is a little nervous waiting for a naughty rendezvous with Bruce Wayne, only Bruce doesn’t show up the BATMAN does! And he doesn’t waste any time throwing Clarke around the room and making him his bitch. Bruce shoves his face deep into Clarke’s massive hairy muscle ass licking his hole like there’s no tomorrow. And lets face it when you’re a crime fighter, there may be no tomorrow! He doesn’t stop there but shoves his long black cock so far down Clarke’s throat he’s gagging for breath!

That’s when the BATMAN makes one fatal mistake by ripping Clarkes shirt open to reveal the SUPERMAN logo! Throwing BATMAN across the room Clarke takes his (pink, Matinee, no less as there was no expense spared on the budget of this amazing film, as is blatantly obvious when we see SUPERMAN wasn’t even given the appropriate underwear!) glasses off revealing that he is actually SUPERMAN and no longer gonna be anyone’s sex toy.

The two SUPERHEROS face one another off for the show down we have all been waiting for. (The one Zack Snyder wasn’t allowed to film!)

This was meant to be part one of two BUT part two also fell into production hell when ROGAN was banned from entering the USA. So you’ll have to wait a little longer for the throw down!

a film by ROGAN RICHARDS
shot by JOHNNYHOLLYWOODS
with JAY BLACK