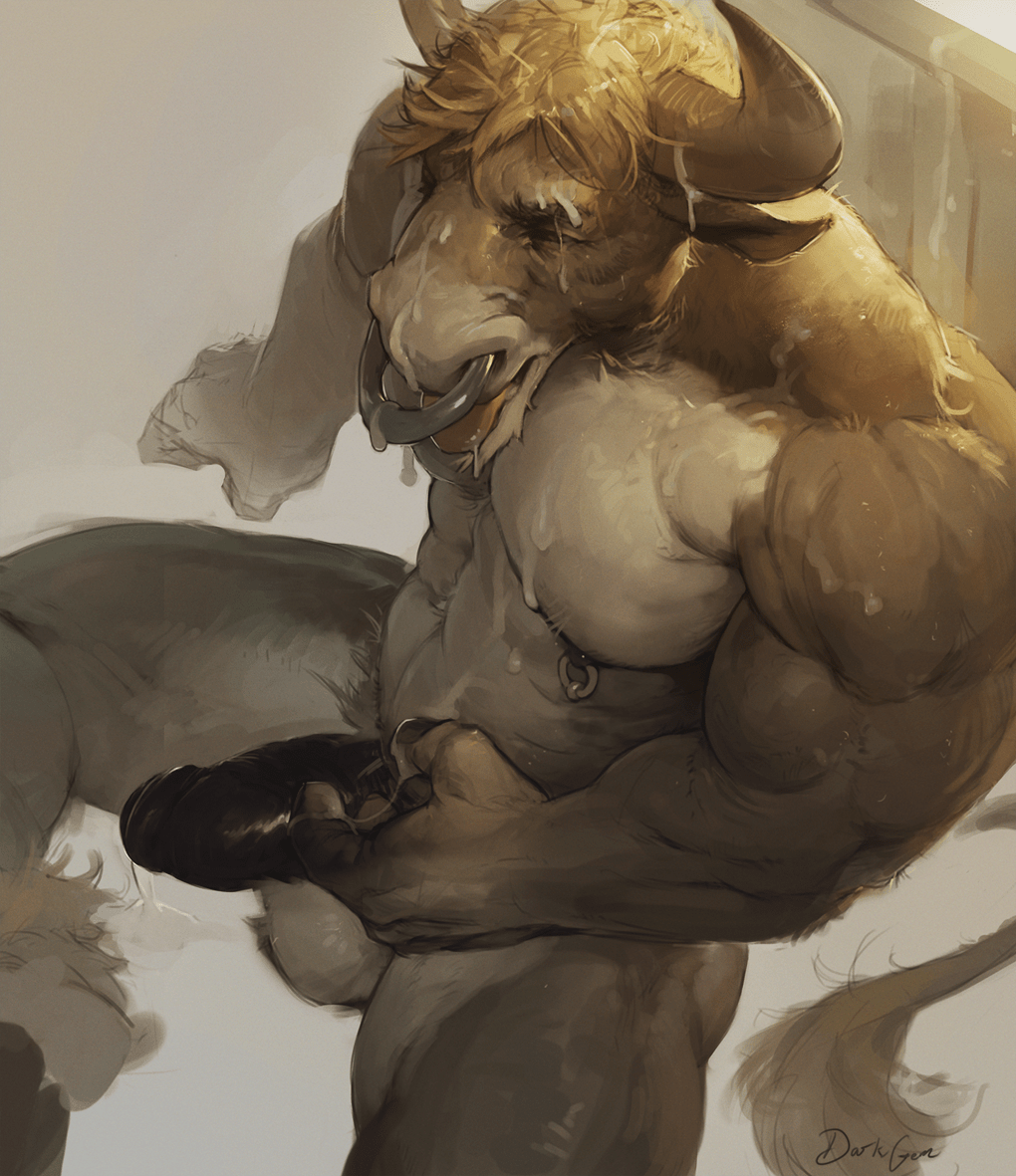 a short story about bestial sexuality by AZZA.

So I own a small farm out west that to all the world seems perfectly quiet and out of the way. Little known fact is that this farm and the large barn out the back houses some of the most prime breeding male stock this country has to offer.

Over the past few weeks these straight alphas of their own herds and packs have been brought out to the farm and been put through rigorous and punishing training both physically (to keep them in prime shape) and physiologically. All of them have been stripped of all humanity they wear shock collars to keep them in check when they get too rowdy and butt heads, because as of yet they have not broken.

To bring in a beast so utterly alpha and indomitable that they will be left shattered and docile. That beast is Rogan.

He arrives at the farm contained inside a trailer not dissimilar from a horse float, but extensively modified as if to contain something of immense strength, heavy duty bolts and chains lash it together. My anticipation only mounts as the trailer is backed up against the entrance to the barn, from inside issues the sounds of sniffing and a deep grunting of a large animal. I can tell Rogan has already picked up the scent of my oblivious “alphas”.

Inside the barn each of the awaiting boys have no idea I’m letting Rogan into their pen. They lounge around in a large open space in the centre, barrels and wooden stumps laying scattered around. Then they catch the scent of him. A deep earthy smell, a mix of sweat, piss and freshly milked seed, they move around on all fours similar to apes occasionally walking upright.

The door into their pen is opened which gets their attention even more as they pace around as the trailer is backed into the opening and the bolts withdrawn. The sound of sniffing within intensifies and Rogan comes charging out into the open space, a sight to behold. Raw bestial dominance radiates from his glistening hide, thick course fur covers him for the most part but the line and shapes of his flexing muscles is still clearly visible. Automatically the other boys grunt and puff their chests up in a show of dominance. Rogan’s half crazed gaze sweeps over them looking for the biggest challenger.

His eyes eventually fall on Jordan, amongst all of them he is the only one to come close to him in size and length. Rogan possesses a level of bestial cunning they do not, to his ultimate alpha mind he sees nothing but mares before him go be given his seed. He draws closer to Jordan, his thick semi erect cock already anticipating the breeding that is to come as pre-cum flows out and leaves a trail behind him as he walks forward shoulders braced to charge into Jordan. The others sniff behind him, still maintaining some distance between Rogan and Jordan, unsure about the outcome.

Jordan smells Rogan’s growing erection and eyes it off, his own flaccid cock now turning red and then purple with flooding vessels making it swell to extreme proportions, the head on it is large and a very dark shade of purple. Out of all the boys stabled here he has been the most dominant and his cock proves why. Rogan charges. The collision is immense, Jordan senses to late Rogan’s ploy to get slightly to his side and he is bowled over. He moves to recover but Rogan has him by the neck now, muscles bulging and throbbing as the surprisingly strong Jordan resists and tries to break free. His teeth gnash the air and a mixture of growling and grunting escapes his lips. Rogan’s own bull roar stuns him momentarily enough for him to freeze, giving Rogan the window he was looking for.

Rogan manages to pin him down with a forearm against his neck, his face smashed into the dirt as Rogan’s glistening knob is pushed against Jordan’s puckering hole. There is resistance for a moment then by sheer force Rogan enters him. The scream/ howl is loud enough to send the other boys cowering. Shaq is the only one to move forward cautiously. Rogan feels the tightness of Jordan’s ass, this is ‘un-bred stock’. Rogan’s cock pummels his insides to such an extent that he near blacks out. Rogan can feel Jordan’s insides respond to the invasion by reshaping themselves to accommodate his thickness, his whole body throbs to the rhythm of Rogan’s pulsing cock.

Shaq has now come within distance of Rogan’s hole and Rogan whips around, a low growl and deep grunt aimed as a warning towards Shaq. All the while Rogan’s pumping into Jordan causes soft whimpering and panting from him. Shaq slowly moves to smell Rogan’s hole, he appears entranced by it and lines himself up behind Rogan and nuzzles his hole, his tongue flicking out tentatively. Rogan responds almost involuntarily and pushes his ass up to as to allow Shaq’s tongue better access.

Shaq’s golden skinned cock swells with immediacy and he rubs it against the ground as he drops his belly down lapping at Rogan’s hole. The fact Rogan seems so focused and pleasured by raping Jordan and being eaten by Shaq gives Jarrod and Justin more confidence and they move to either side of him eyeing off his thick chest, they are panting and look almost thirsty. Rogan’s nipples are so engorged with the blood flowing through his system that they are almost dripping. Both the boys move into take a nipple each and they start sucking deeply.

As Rogan’s dominance of the group reaches its height, each boy there serving him in his own way, his balls start to swell, at first imperceptibly but then the longer he’s worked and the louder he pants I can tell something is happening. Rogan’s chest swells giving the boy’s on each nipple a start, their mouths are now almost too small to fully suckle. Shaq’s tongue has penetrated deeper then expected and found just the right spot to work, it moves in strange ways inside Rogan, not deep or wide but there is a little stretch in his hole. Rogan’s balls continue to swell so much so they start to push against Jordan’s peach ass and cause a slight friction burn to redden his ass cheeks. Rogan’s eyes start to glass over as he feels the cum swell like a wave just before breaking, his cock twitches and bounces in strange ways inside Jordan, producing pleasing whimpering and gasping, the time is close.

As the thrashing of Jordan’s ass reaches a feverish pitch, Shaq’s tongue has done it, it has hit a spot inside Rogan that starts a chain reaction. His balls turn a dark red that only means one thing they are about to unload a gods volume level of beast seed, the suckling intensifies as Jarrod and Justin sense the change in tempo, Jordan’s moaning and hissing tells Rogan his cock has broken into new depths inside him. “It’s time to impregnate his cunt” I whisper to myself, and Rogan’s balls seem to respond by unleashing a gallons worth of searing hot, thick, white and creamy alpha seed so deep inside Jordan that he blacks out as it floods through his system. Every part of his insides is filled to the brim with virulent Rogan gravy. Rogan’s whole body shudders and flexes as he spasms, milking every last drop into Jordan’s broken form, with a satisfying sloppy pull out Rogan dismounts Jordan and backs up.

All the boys back up and eye him cautiously as Rogan goes and sprawls himself on the largest rock in the barn and lays there panting softly. Justin comes up and laps at his flaccid but still white-coated cock. Shaq and Jarrod being jealous come and join him till all three and bent over cleaning the cum out of Rogan’s hairy balls and lower body. They spend some time doing this until he’s satisfied and shoves them off with a grunt and shove of the legs. It’s then I notice Jordan has moved from where he was left broken, he has padded up to Rogan but something is different.

What I thought to be his respectable pecks are in fact now so swollen as to almost resemble tits, they do sway slightly the way tits do, I sense they are filed with milk as he turns to move towards Rogan’s head you see his belly distend and swollen. Rogan grunts in satisfaction, such is the strength of his alpha seed that he has turned this would be alpha into a impregnated breeding cow. Still with a cock but now totally impotent.

The Beast has started his work but there are still plenty more bucks to be bred and broken.