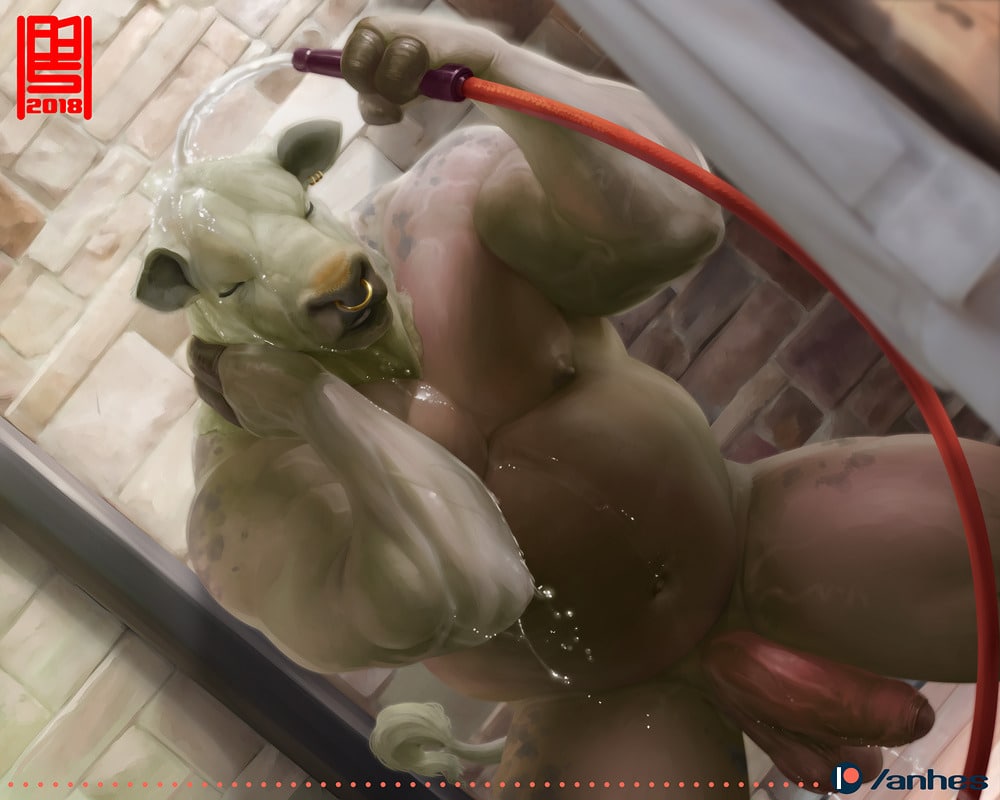 a short story about bestial sexuality by AZZA. The sequel to THE FARM.

The new farm is quite a step up from the last one. I had it especially built with the ability of the Beast in mind, designed for him to inseminate and mind break would be alphas, this place would become the new breeding ground for him I had decided.

On one wall we had stocks and pipes, all with large empty jars suspended next to them with hoses and mouth feeders. On the other where the pens, fresh hay all laid down and udder milkers all lined up.

Jordan was the first to be led into the new stalls, his shorter stature made his heavy swaying udders almost brush the ground and he came in, lead on a leash attached to a nose ring driven through his snorting nose, his biceps flexing as he took in the clean new smell of the place. He was led to his new pen and leashed to the wall, a pipe leaking pure raw protein was then turned on which he started suckling at immediately.

The next to be brought in was a toned young guy, blindfolded and whimpering he was stripped naked with a shock collar around his neck and a hood over his face. Being led on a leash he was taken past Jordan who turned and sniffed at him as he went past his pen and led into his own next to Jordan’s, where he was de-hooded and leashed to the wall. His nervous cries started to excite and arouse Jordan whose long heavy cock began to swell and leak pre-cum. A faint whiff of it reaching Nathan who freaked out and begged to be released.

Next came two guys, similarly hooded and collard as Nathan was, they were fighters though and they pulled and yanked at their leashes, to such an extent they were shocked via their collars to near black out. The muscles on their lean tight body’s straining as the electric current ripped through them. Seeing and smelling this, Jordan’s already engorged cock reached its peak, throbbing angry red as he gripped it and jerked himself off grunting like the muscle animal he was, one hand pumping away and with his other pinching hard on his nipples causing a spray of milk to hit the ground and splash onto the hoods of the struggling brothers.

Both ranting and raving they were led into their pens and forced down onto their knees where their hands were shackled to the floor with short metal chains, their legs locked into spreader bars, perfectly exposing their straight pink male holes and their limp frightened cocks, both where well-endowed but oddly the younger brother Noah seemed to have the fullest knob.

With the latest livestock unloaded and penned up for the night Jordan is placed under the milking pumps and hoses are attached to his massive milky pecks and he snorts in pleasure as he’s drained. After the Beast had seeded him and made him his favoured breeding stock, Jordan had enjoyed untold gallons of the god seed the Beast produced, making his body almost painfully swollen with muscle. As litre after litre of Jordan’s milk is pumped out and collected into the tank his leaking cock doesn’t go unattended either.

Another pump is placed on his raging hard red knob as his tong lolls out the side of his mouth and he grunts with a dumb pleasured grin. His muscles twitching involuntarily as his balls throb and pulse. Then with a sigh he collapses as the flood of his seed is sucked and pumped out of him. With his pec tits empty the udders are taken off and he’s fed some more protein before he lays himself down to rest, panting and content.

After a while of yelling and thrashing against their chains and leashes, the brothers, Noah and Liam finally quietened down. These two will be tricky to break but the method and means are there. Nathan is the next one that needs to be used and it’s decided it’s time that the Beast is shown his new, fresh and unseeded cunts. At a pen far down the end of the milking sheds is a big steel door, the slats to let in fresh air are opened and a strong stench of stale sweat pours through the holes and drowns the pens. Once this thick smell starts to settle the scent of new fuck holes wafts back into the Beats pen and Rogan’s nostrils flair as he sniffs the air and a brutal grin spreads wide across his face.

With the scent of Nathan in his nose Rogan stomps over to his pen and finds the boys lean dark teenage body just to his liking. Nathan quivers and whimpers as the Beast sniffs around Nathan’s hole. Without thinking Nathan kicks out at the titanic hulking mound of muscle-clad god beast, his soft foot bounces of Rogan’s chest and barley even registers as the Beast grabs a handful of the soft hair from the boy’s head dragging Nathan to a standing position. Nathan’s head reaches just shy of the middle of Beast’s chest, squarely in line with his two juicy nipples that are starting him in the face. With one hand fully enclosing Nathan’s head the boy is pushed onto a nipple, he struggles to resist at first, his whimpers muffled into a milk leaking nipple.

With the other hand, and uncharacteristically gentle of him, the Beast eases one thick finger, easily as big as Nathan’s own cock, up into the captured straight boy. There is a little resistance at first but after some teasing all the finger slides in. Nathan’s peachy brown boy ass is cupped in one massive hand with a finger deep in him and he can’t help but moan like a whore and yelp. With the yelp the Beast knows he has him and he forces Nathan’s gaping mouth harder onto the muscle milk leaking nipple the boy starts to suckle. Gradually his eyes glaze over, and he bounces unconsciously on the massive meaty finger inside him, drinking more and more milk until his smooth toned abs are now distended and his belly is swollen with muscle god milk.

With Nathan now mindless and suckling, Jordan is released from his own pen and comes around to face his alpha Rogan, the two muscle creatures greeting each other. The Beast pulls his boy cunt wet finger out of Nathan allowing him to flop to the ground, his milk filled belly swaying as he kneels there on all fours. The Beast turns round to greet his favoured breeding partner, Jordan who instinctively sinks to all fours and turns around, massive thick ass to Rogan showing off his clenching and unclenching hole, hands made into fists he shakes his thick ass for Beast to see.

Wasting no time and with the cock of godhood already throbbing, pulsating and veins throbbing for Jordan to see and savour the Beast grapples and pumps his cock so deep into Jordan’s guts that Jordan is forced to the ground winded, his pecks pushed hard into the ground. The Beast bites the back of Jordan’s neck to assert all the dominance and force of his power over his breeding stock, Jordan’s cunt squeezes on to the cock fucking his insides to pulp with pleasure and the Beast pumps the boy relentlessly, his muscles inflating even bigger as testosterone flows through them, working up a sweat for Jordan to lick off like the submissive cow he is.

Jordan’s tight muscle hole flexing and un-flexing around Beast’s shaft was driving Rogan to more and more pleasure. With a thick meaty tongue lolling out the side of his mouth, holding himself up on his flexed arms, fists punched firmly into the ground to withstand the powerful smashes, Jordan had his whole muscle Demi-God flex on show. The huge cock inside him was sending his body into overdrive and his swaying peck tits sprayed milk in every direction, swaying under him and hitting the Beast’s now burning hot gargantuan balls. As Jordan’s peck milk ran down Beasts balls it was the final tease the alpha could take and with a guttural growl into his bitches’ ear, he unloads a flood of God-seed directly into Jordan’s stomach, at the same time Jordan’s still heavy muscle cock sprayed so hard it shot him in the face drenching his hard jawline and mouth.

Noah looks on as his brother is fucked into submission, the animal grunts of the Beast coinciding with the winded gasps and grunts coming from his older brother who he can see is slowly starting to black out as drool starts to leak from the side of his mouth as his eyes glaze over. Noah’s cock starts to twitch in time with each gut churning pump the Beast pushes into Liam and the Beast notices this and reaches over to pull Noah chains to drag his cock inches away from his mind broken older brother. Not even breaking his rhythm the Beast gives Noah’s chains one last pull and his teenage cock is forced into his older brother’s mouth.

The teens cock is surprising big as it throbs in Liam’s mouth, rivers of pre-cum flow down his older brother’s throat to add to the massive pool of it already formed from the overflow being pumped into him by the Beast. Liam’s belly has swollen with all those juices in him, and his nipples leak slowly as he’s filled. With a final grunt the Beast empty’s the inseminating load into the older brother. Now heavily impregnated by the Beast, Liam’s cock spurts a pathetic load onto the floor. Noah’s own load is painted all through his older brother’s throat and as he pulls his softening cock out the Beast stands over him. Ropes of the seed just unleashed into his older brother now drenching his tight body as Rogan sprays Noah with the last of his Godly spunk and the teen laps it of his own body, eyes glazed as the thick potent spooge alters his body and mind. He goes around and gets his older brother back up onto all fours and begins to suckle on his now enlarging nipples and gently caresses his cock.

Spent for the moment, Rogan stomps back to his pen stopping to taste some of Jordan’s milk before collapsing into a deep slumber on his back, with a Jordan milk moustache and body heat visibly radiating off his slowly deflating godly-monstrous cock…