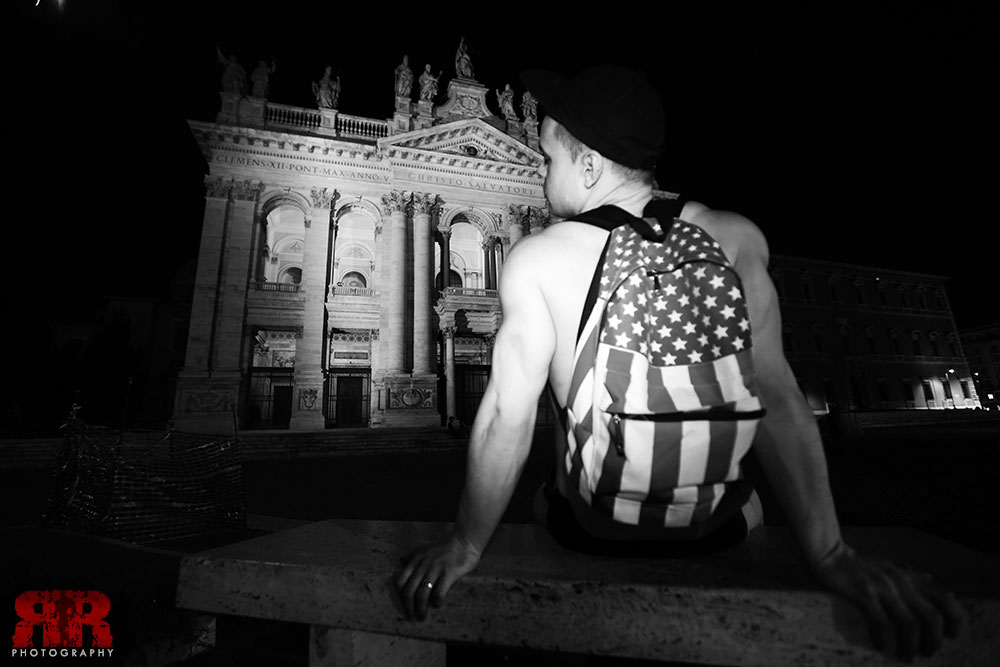 “Around half way through Europe my bubble burst. I started hearing reports from Italy that the Vatican was trying to ban my show.”

So I’m in Rome, and Mike Anthony AKA D BOY and I decided to do a photoshoot at the Church of San Giovanni in Piazza San Giovanni. I rocked up to the apartment he’s crashing at a few hours earlier without having dinner, but arriving with my camera, and a bottle of rum for him and whiskey for me. We can all see where this is going…

So we start in a mirrored bedroom with D in heels, black undies, cap and smoking cigarettes, and we consume what must have been a shit load of booze. I don’t know if it was because I haven’t eaten or I am 10 kilos lighter but unbeknownst to me I get drunk. Then D Boy pulls out a USA backpack that he bought in a Chinese shop in Spain and wants to do a location shoot with it.

I follow him to the fore mentioned location and he gets his gear off, wearing only my #dontyouknowmyshoesarefamous yellow Adidas kicks, red GoGo shorts, black cap and this cheap ass back pack.

D BOY quickly puts his clothes back on as the police officers approach us speaking English and Italian, asking what we are doing. D BOY starts talking to them in Italian and all of a sudden none of them speak English anymore. There’s a bitch cop full of attitude, seriously she was a dyke or compensating for not having a cock, and 3 blokes. I approach the she-bitch and the guy next to her and try to communicate with them. They speak Italian back to me and I point out that they were both speaking English a few seconds ago, to which the wanker dude replies, “You are in Italy. You speak Italian”.

D’s doing most of the peace treaty talk. They all seem focused on him, I think of a quick getaway but realise I don’t know where Mousey is? The little shit probably ran off at the first sign of trouble. Eventually they ask to see the photos and I show them. Then they ask me to delete them. Horrified I say, “Why?” They look at me weird so I may have mumbled something incoherent, as I was drunk. (Unbeknownst!) Regardless, I will not compromise my art and defend it till my dying breath! There’s a lot more talk which I don’t understand. I’m trying to reason with them but I think I’m just pissing them off more than anything.

All of a sudden one of the guys opens the police car doors and tells us to get in. At which point D BOY points out that if they had anything on us they would have arrested us already. This only fuels my foolish rebellion as I really don’t want to delete my pictures and decide to fight for my rights as an artist and proclaim, rather dramatically, “Arrest me then!” And jump in the car. The guy then tells me to get the fuck out at which point I have a moment of clarity about my situation and where I am and quickly jump out of the car.

Another bloke takes D BOY aside and in between asking him advice on steroids, tells him they don’t give a fuck about the photos but they were called here due to complaints and need to resolve the issue. He then goes on to explain the crazy Aussie can delete the pictures or we can all go back to the station and nothing will actually happen to us but it will take up the rest of the night. D BOY translates and I wonder why they just don’t smack our asses and tell us to piss off while I eye the female officer cause she’s a cunt.

I eventually give in, or maybe its instantaneous, as time is unaccountable for when you’re pissed. I painfully go through the entire shoot with cunt face and the guy that spoke to D and delete all the pictures they think are disrespectful to the FKIN church I’m standing in front off. I try to sneak over a few all the while hoping no cock shots pop up outta the blue. Finally happy they have upheld the law we are allowed to go.

Here are the only images saved from that night…

We walk home. I vomit in the toilet and pass out.

Oh, Mousey was in D Boy’s pocket the whole time laughing his little face off.

the story of BATMAN does SUPERMAN

the story of BATMAN does SUPERMAN